From December 21 to January 1, the GenePattern team will be unavailable due to the year-end closing of the Broad Institute.  During this time, the GenePattern servers and repositories (including GParc) will remain up and fully functional. We will be monitoring this daily and, should anything happen to disrupt service, we will work to resolve any issues within 24 hrs. However, due to the holiday closing, please be aware that:

If you have any questions, please feel free to contact us.

Happy Holidays from the GenePattern team!

Since the release of Mac OS X 10.9 (Mavericks) on Oct 22, 2013,  many of you may have already upgraded or are considering doing so, given the ease of access to this upgrade. Some of you have reported problems with GenePattern on this new OS and we have observed some in our own testing and exploring. This post aims to go over what we know and any work arounds or fixes we have so far . We will continue to provide updates for any incomplete or (unknowingly) inaccurate information.

There are 3 basic ways in which one may use GenePattern:

GenePattern and the latest Java 7 update (45)

Since the release of Java 7 update 45 (Oct 15, 2013) there have been some reports of difficulties with Java and GenePattern visualizers.

Release notes from Oracle can be found here.

The most prominent change in this latest release (as pertains to most GenePattern users) is a warning message that will appear when you try to run any Java app which is from an "unknown" publisher and does not have a, now required, permissions attribute. 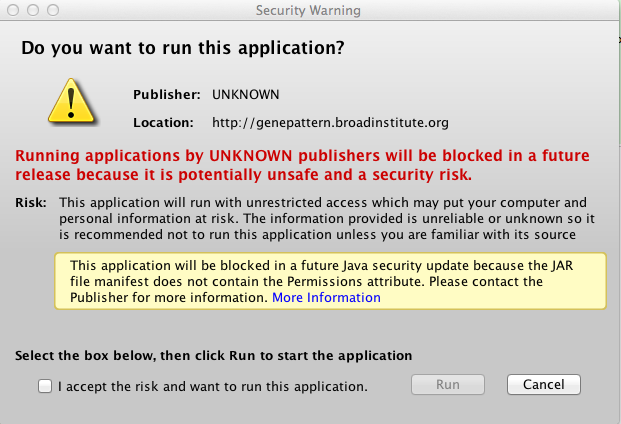 The GenePattern team is looking into how we can address this warning such that our software will not be blocked in a future release of Java. In the mean time. you can simply check the box next to "I accept the risk..." and then click run. This should allow you to use any visualizers as before. If you have any other issues after allowing the acception, please refer to this previous blog post about Java 7...