Using Dropbox in GenePattern via GenomeSpace

The folks here on the GenePattern and GenomeSpace teams thought it might be nice to point out a little "pro tip" for you Dropbox users out there.

So, how do you go about setting this up.

Step 2: Follow the direction in this GenomeSpace blog to set up our Dropbox/GenomeSpace connection

Step 4: Use your GenomeSpace connected Dropbox files from the GenomeSpace tab, as you would any other file in GenePattern. 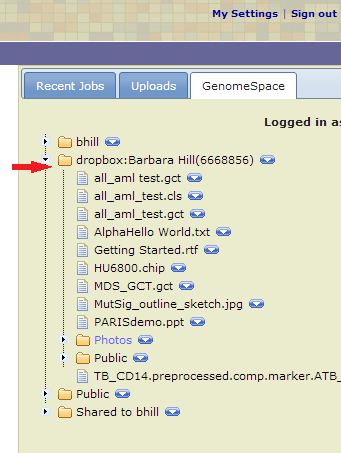 The Outage is a scheduled, major four-day disruption to most Broad IT services. In preparation for our move into a new building the Broad IT Services group will move all central IT hardware to a new facility. During the move, which will take place from 12:01 am* Thursday, October 17 to 11:59pm Sunday, October 20, almost all of Broad's IT services will be unavailable.

Broad employees and associates may access more details on our intranet.

External users may read more information on the Broad website.

Users of any Broad Institute hosted GenePattern server should expect:

GenePattern 3.7.0 has been released!

3.7.0 (build 12335)  is available for use on our Public GenePattern Server,  via download and as an Amazon Machine Image (AMI)

We also made some user requested fixes and enhancements:

Full details about 3.7.0, includeing hardware/softwared requirements and known issues can be found in our release notes.

Please let us know what you think!